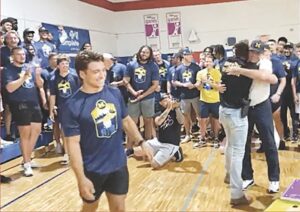 Sheriff Chris Swanson and his staff greeted members of the University of Michigan football team and Coach Jim Harbaugh, July 21, when they arrived in Flint, July 21. The visit included a trip to the Genesee County Jail and the International Academy of Flint. The Wolverines went to the jail to learn about Swanson’s IGNITE program (Inmate Growth Naturally and Intentionally Through Education). The program rewards inmates for learning and working toward an eventual career while incarcerated to prevent them from returning to jail in the future. The team toured the jail and served the inmates lunch during their visit. The stop at the jail is part of the Wolverine’s trip around Michigan to help out with service projects. Pictured here, Swanson hugs Harbaugh after giving a quick briefing to the team about where they would be going for the day’s activities.